In this Briefing Note we review the management of construction work as defined by the Regulations and is in response to a number of recent requests from clients for further information and advice.

Note: although domestic clients are mentioned in the Regulations, they are not addressed in this briefing note.

The Regulations Establish A Number of Dutyholders:

Many companies/contractors often misunderstand the scope of the regulations and consider themselves out of scope as they do not construct or demolish buildings. It should be noted that far reaching additional activities covered by the regulations include:

‘the installation, commissioning, maintenance, repair or removal of mechanical, electrical, gas, compressed air, hydraulic, telecommunications, computer or similar services which are normally fixed within or to a structure’

All construction work is regulated by the CDM 2015 Regulations.

The Regulator can impose penalties for failing to meet these Regulations as well as any failings defined in the Health and Safety at Work Act 1974.

There are many other regulations, guidance documents and British Standards that must be considered for construction work dependent upon the nature of the work to be completed. As an example:

Hence the need to ensure you have access to competent advice (see below).

There is a requirement within the Regulations that competent construction advice is required for construction projects.

As an example, it is likely that a competent person will hold minimum of NEBOSH Construction Certificate (or equivalent) to be able to provide competent advice.

For complex work, a higher level of competence and experience would be expected.

Authoritative guidance on methods by which compliance with the CDM Regulations 2015 can be achieved is detailed in the following HSE guidance found on their web site. 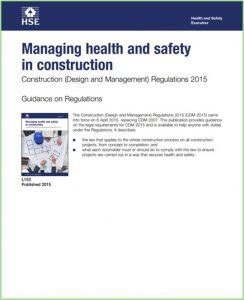 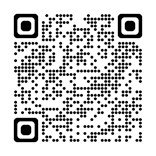 Scan the QR Code to obtain a copy.

Note: at the time of the accident, the principal contractor was May Gurney, but it was acquired by Kier after the accident, in July 2013. From then on it became known as Kier MG. 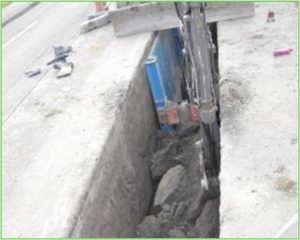 Before work took started, the Lincoln County Council sent Kier and John Henry information warning that ground conditions were poor. Boreholes were dug and samples taken along the street in Holbeach. The council said that the conditions meant that a specialist trench support system would be required.

A worker had his leg broken in six places when the unshored trench he was working in collapsed. His right ankle was left permanently damaged and he was off work for more than a year.

Kier MG was principal contractor on a project to build new storm drains for Lincolnshire County Council. The work was subcontracted to John Henry & Sons which in turn subcontracted it to Lawless Civils without informing Kier.

Lawless Civils employed a supervisor at the Holbeach site who had no relevant experience, training or qualifications. He was also marked as a first aider, despite having no first aid training.

A three-metre-long trench box was installed in the excavation to protect those working in it but it was half the length of the pipes being installed (six metres). There were no other forms of protection such as trench sheeting.

The worker was trying to level a pipe section for a second time, when the sides of the trench collapsed and trapped him. As he stepped outside the box to level the pipes, the trench gave way.

Lincoln Crown Court heard that after the accident, John Henry & Sons backdated the method statement for the work to give the impression that it was signed by the workers before the collapse.

Perverting the Course of Justice

Lincoln Crown Court also heard that after the accident John Henry & Sons backdated the method statement for the work to give the impression that it was signed by the workers before the collapse. This was considered by the Court to be completely unacceptable and underhand. The Court found that failings which contributed to the accident were systemic and extensive, but that the attempt to cover up their failings in such a dishonest manner substantially aggravated the case.

For all enquiries please contact us: helpinghand@wmcompliance.co.uk or call our team on 0203 819 8829